While we’re working on a fix for this Bad Image issue, here’s a Good Image to look at:

Greetings! When you launch our latest Beta build, you’ll get an error message pop-up named something like “WowB.exe - Bad Image”. We’re working to resolve this issue, but in the meantime if you click OK, you should be able to launch WoW as normal and connect to the Beta realms. Sorry for the inconvenience! 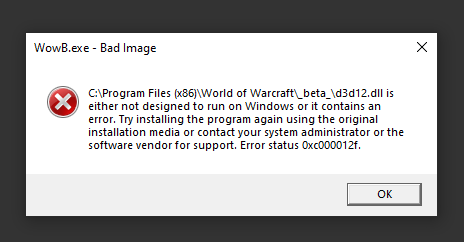 Greetings! We just pushed a new client build out to the Battle.net Desktop App, build 46157, that should re-enable the Bug Report & Feedback tool. Sorry it took so long!

We’re still investigating into a potential issue with it on the Valdrakken realm, but it’s definitely working on the Tyrhold and Koranos realms.

Have a great weekend everybody, and thanks for all the testing!

Greetings! We just brought our Beta realms back online and they appear much more stable than yesterday, but we’ll keep monitoring as more players log on. (I don’t want to jinx it!)

Additionally, we’ve pushed out a new client build this morning (46092) that should unblock Mac users from being able to update/launch the Beta.

Lastly, we’re aware that Bug/Feedback reporter is broken right now, we’re working on a fix for that and hopefully will have it deployed sometime later today or early tomorrow. We’re additionally working on some fixes to a few Profession UI elements and will try to hotfix those in but I don’t have an ETA for that just quite yet.

Thanks for being flexible everybody! Have a great day <3

Looks like I spoke too soon, we’ve discovered some late-breaking stability issues with the realms and will need to take them offline to diagnose and fix them. Sorry for jumping the gun!

We’ll aim to have them up and playable tomorrow. Have a great night everybody, thanks for being patient with us during this Beta process.

Apologies for the late night build! Our Beta realms are back up with a new weekly build for you to test.

PSA for Mac Users: We’re aware of some critical issues affecting the Mac client, and are working on a client build to fix it. We expect to be able to deploy that tomorrow morning (West Coast time).

Welcome to the team! What’s your favorite vegetable?

Sorry for missing the mark on our estimated time, PTR realms are now online!

We’re in the process on updating the 10.0.0 PTR Realms with a new build, but ran into some delays while doing so. The PTR Realms will remain offline while we work through those issues, and we expect to have it up and running again tomorrow around noon PDT.

Apologies for any inconvenience.

Beta and PTR realms are back online, ahead of schedule! As noted, this was not a build deploy or bug fix maintenance, just some backend maintenance. You shouldn’t notice anything different from a few hours ago.

We’ll be deploying a new Beta build later this week with all it’s usual goodies, datamining, and the like.

Have a great day everybody!

Apologies for the short notice, we’ve had to take down all Beta and PTR realms (both Mainline & Wrath Classic) for some critical Database maintenance. We hope to have those test environments back online around 3-5 hours from now.

Note that this isn’t a build deploy, the same build will be present when servers come back online.

It takes a bit longer for the Level-Up realms ( Tyrhold and Koranos) to come online after restarts because of how they’re configured, but all 3 Beta Realms should be back online now, and hopefully more stable than they were a few hours ago.

Thanks everybody! Have a great weekend.

I think we figured out the issue here, it’ll take another restart to fix but we’re working on it now. Sit tight and we’ll get things stable again shortly. Sorry!

Beta Realms are back online and we believe the issue with Talents not being saved/applied properly has been resolved, but we’ll keep monitoring either way.

Have a great weekend everybody!

During our weekly maintenance on the 9.2.5 PTR Realms we encountered an issue that will require a new build to resolve. We currently estimate that PTR realms will remain offline until we can deploy that build, which we hope to have ready by early next week.

Apologies for any inconvenience!

We believe we’ve found a fix for this. We just deployed a new client build for download, and are restart the PTR realms to pickup a server code fix as well. If you were disconnecting on the PTR over the last few days, give it a try later today and let us know if things are more stable. Thanks!

Apologies, the 9.2 PTR realms are offline at the moment while we deploy the latest PTR build. We hope to have them up later today, in the next few hours.

While updating our PTR realms to patch 9.2, we ran into a few technical issues that are preventing us from marking realms live to testers. PTR Realms will remain offline in maintenance mode tonight, and we hope to be able to bring them up to players tomorrow morning (US Pacific Time) once we get a fix deployed.

Sorry for the short notice! We’ll get you in there as soon as we can.

If you log out of the PTR and update your PTR game client to 38524 it should resolve the mount disconnect issue. Apologies again!

We’re aware of frequent disconnects when mounting up in this latest PTR build, and will fix as soon as we can. Apologies for the inconvenience.