Welcome to the July Update!

In this month’s post, we’ll be highlighting our upcoming support for Steam Workshop, the next update and future developments.

Steam Workshop Much to the excitement of many in the community, our next update will include Steam Workshop support for saved games and modular prefabs.

Getting everything up and running proved to be initially troublesome, but the implementation didn’t take as long as we expected. Seeing the Workshop page fill up with some development and community items taken from Discord for testing purposes was incredibly exciting. 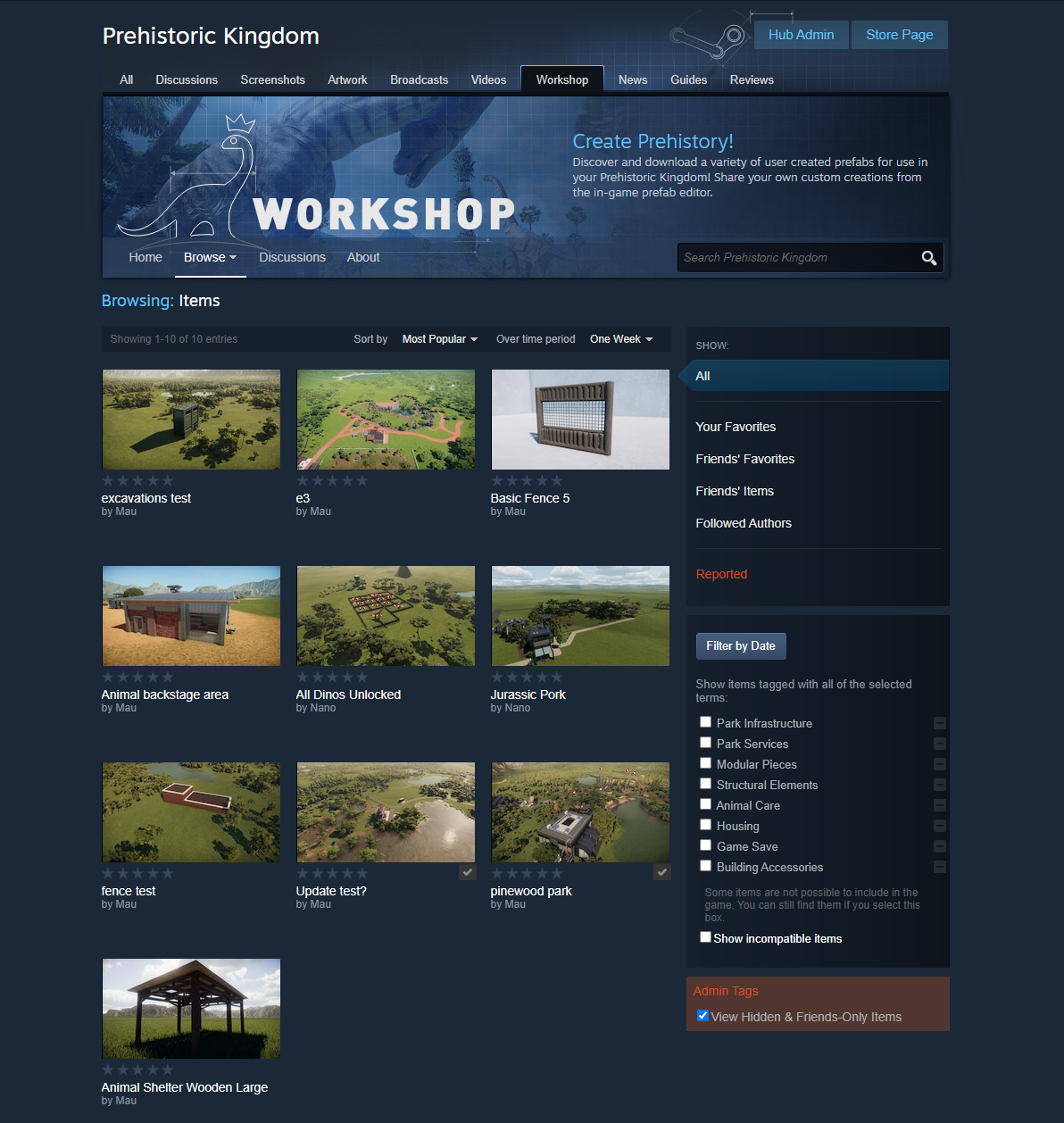 Welcome to the June Update!

We hope everyone had a very Happy Pride Month! June was a busy time for the team as we released ... Read more 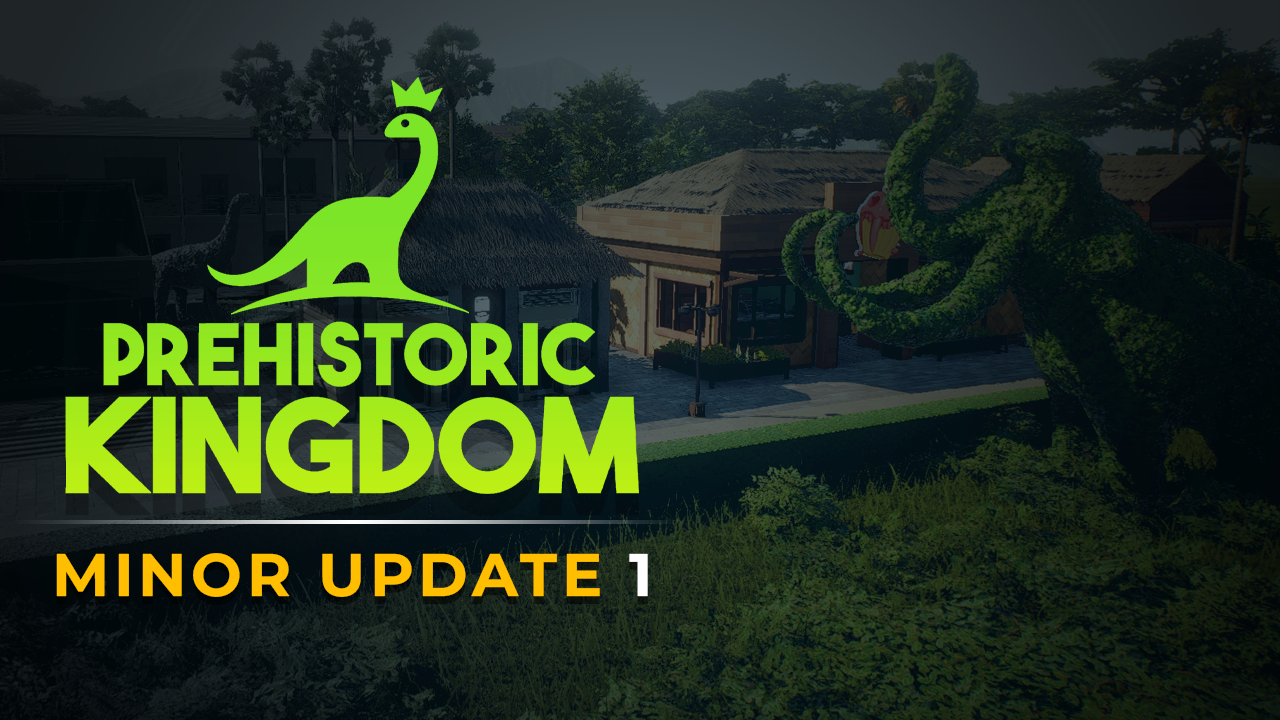 Minor Update 1 is now available! In this patch, we’ve added a number of new features and quality of life changes to help improve the state of the game. This is only the beginning of our journey through Early Access as there will be many more changes to come.

Unfortunately, we weren’t able to get this update out earlier due to engine related technical issues. Previously hidden problems with Unity have only just revealed themselves due to a significantly larger playerbase with highly varied machine specifications.

Though we are continuing to fight Unity’s rediculously poor loading and memory related management, we’ve made good headway in optimizing the game and implementing custom workarounds. This will be an ongoing process that’s an unfortunate reality of making a game this large... Read more

Welcome to the May Update!

In this month's post we’ll be taking a brief look at what we’ve been up to over the last couple of weeks as well as sharing some statistics from the first month of Early Access launch.

We’ve been working around the clock to fix some of the main issues regarding performance, and while that’s going to be an ongoing task for us, we’ve located some of the main hotspots regarding high memory usage. This performance improvement update targets some of them by integrating more efficient engine memory utilization, substantially reducing RAM and VRAM across the board. This is going to be especially notable on low end machines, as we hope the game’s going to be less prone to crashing and generally easier to load up.

These are not going to be the last of our efforts on that front, as we’ve still got some further room for memory optimization going forward, as well as some more memory leaks to completely iron out (at the moment most notable by loading in and out of main menu repeatedly).

The good news doesn’t end here! We’ve been religiously testing all of our rendering systems, and were finally able to consistently pin-point the... Read more

Post
29 Apr 01:18     Blue Meridian on Steam - Thread - Direct
Hi everyone, thank you for your invaluable feedback and patience with the many current glitches. We've done a new round of general fixes, and added a much requested input feature: re-bindable camera controls. Over the next few days, we're gonna address the biggest performance and stability issues, as we're targeting to lower the game's general RAM and VRAM usage.

We'll be releasing a hotfix soon to address various stability issues with the tutorial. If you are experiencing the FPS-drop bug, please try restarting your game.

To read a full breakdown of what's currently on offer, check out the Launch Features recap on our official blog[www.prehistorickingdom.com].

Post
25 Apr 10:00     Blue Meridian on Steam Forums - Thread - Direct
Official Update Roadmap As this is an Early Access title, Prehistoric Kingdom is NOT a finished game. Gameplay elements or content missing from current builds may be planned for inclusion later in the games development cycle.

The roadmap will be updated as major content updates roll out, so be sure to check in to see the latest changes or announcements.

Notes and Other Information Read more

Before we delve into what’s available, we’d like to remind everyone that this is simply the start of our journey through Early Access. There’s a lot of exciting content yet to come and we hope you’... Read more

Bring extinct creatures back to the world with PREHISTORIC KINGDOM Early Access, arriving APRIL 27TH 2022! Featuring 23 animals at launch, 3 playable maps & an array of powerful creative tools to build the park of your dreams. 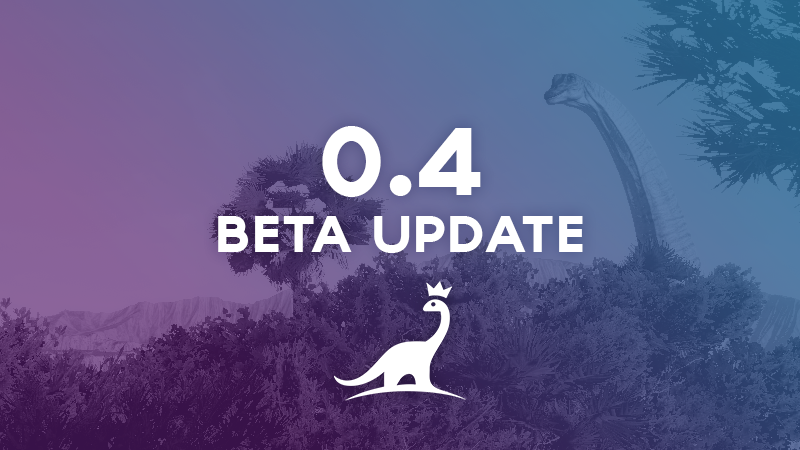 This update has taken longer than we initially expected. We wanted to make sure we could reasonably polish new game mechanics while working on Early Access release features, and marketing in parallel. We apologise for the delay and hope you all enjoy the new update.
Features 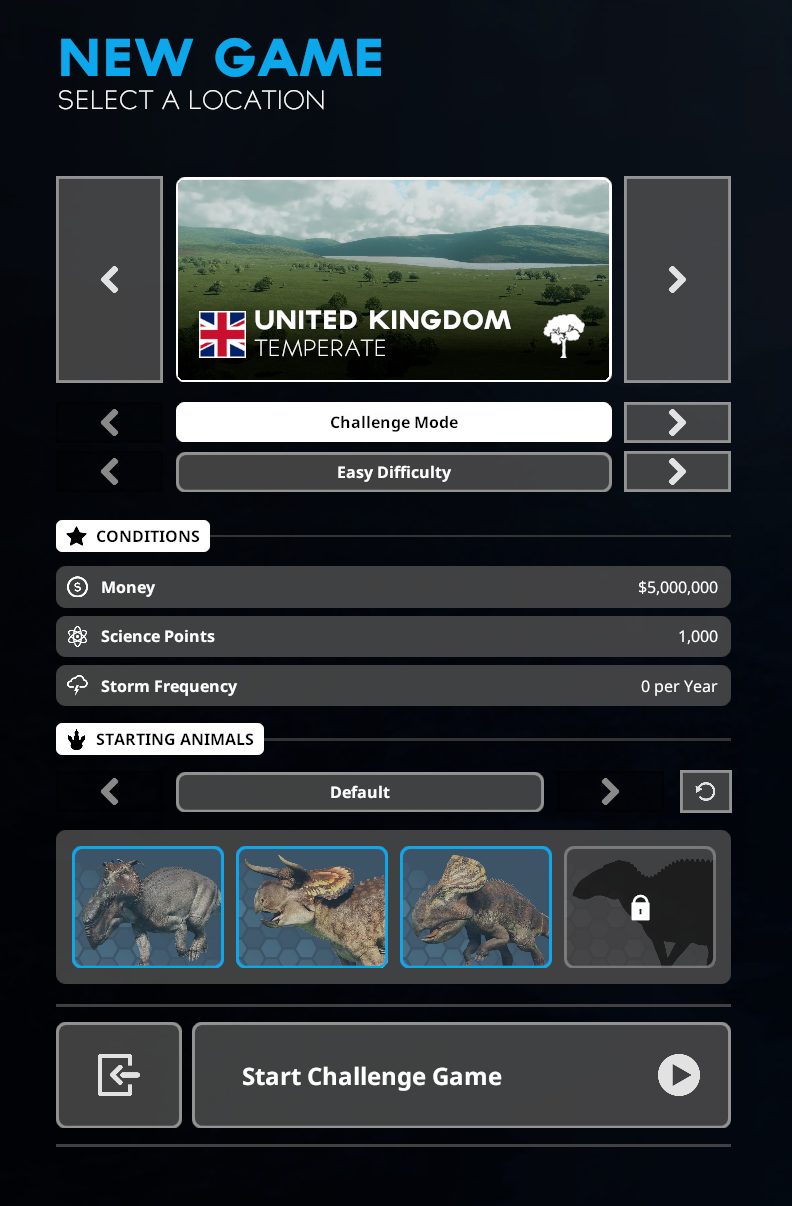 Welcome to the March Update!

In this month’s post we’ll be sharing some new features that will be introduced before Early Access launch, and briefly discussing some technical challenges we’ve had to overcome before the next update is released.

State of Development Due to unfortunately-timed technical issues over the last few weeks, we had to delay the long-awaited poop update.

Welcome to the February Update!

In today’s post we’ll be exploring parts of our next Beta update and delving into what our busy team’s been working on. If you weren’t already aware, a public roadmap highlighting some of our upcoming plans can be found over on Trello.

Modular Items Extra wall pieces and pillars will soon be added in our next update, allowing for new shapes and wall combination... Read more 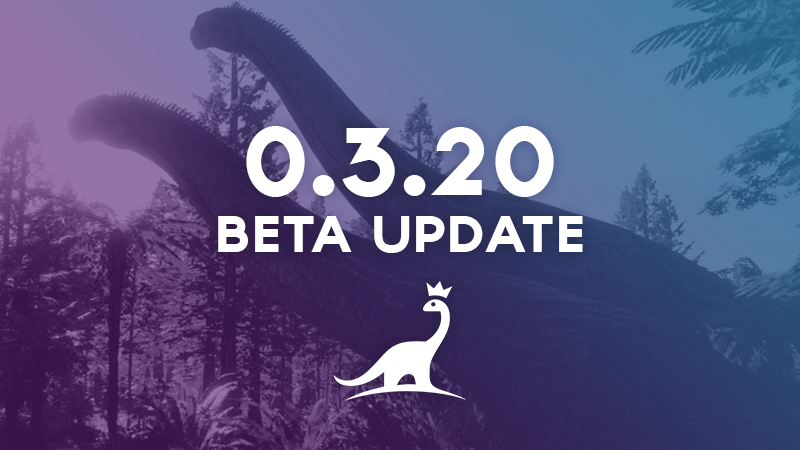 Thank you all so much for your feedback over the first week of Beta. We'll be working hard to add new content and improve Prehistoric Kingdom before our Early Access release in April, 2022. 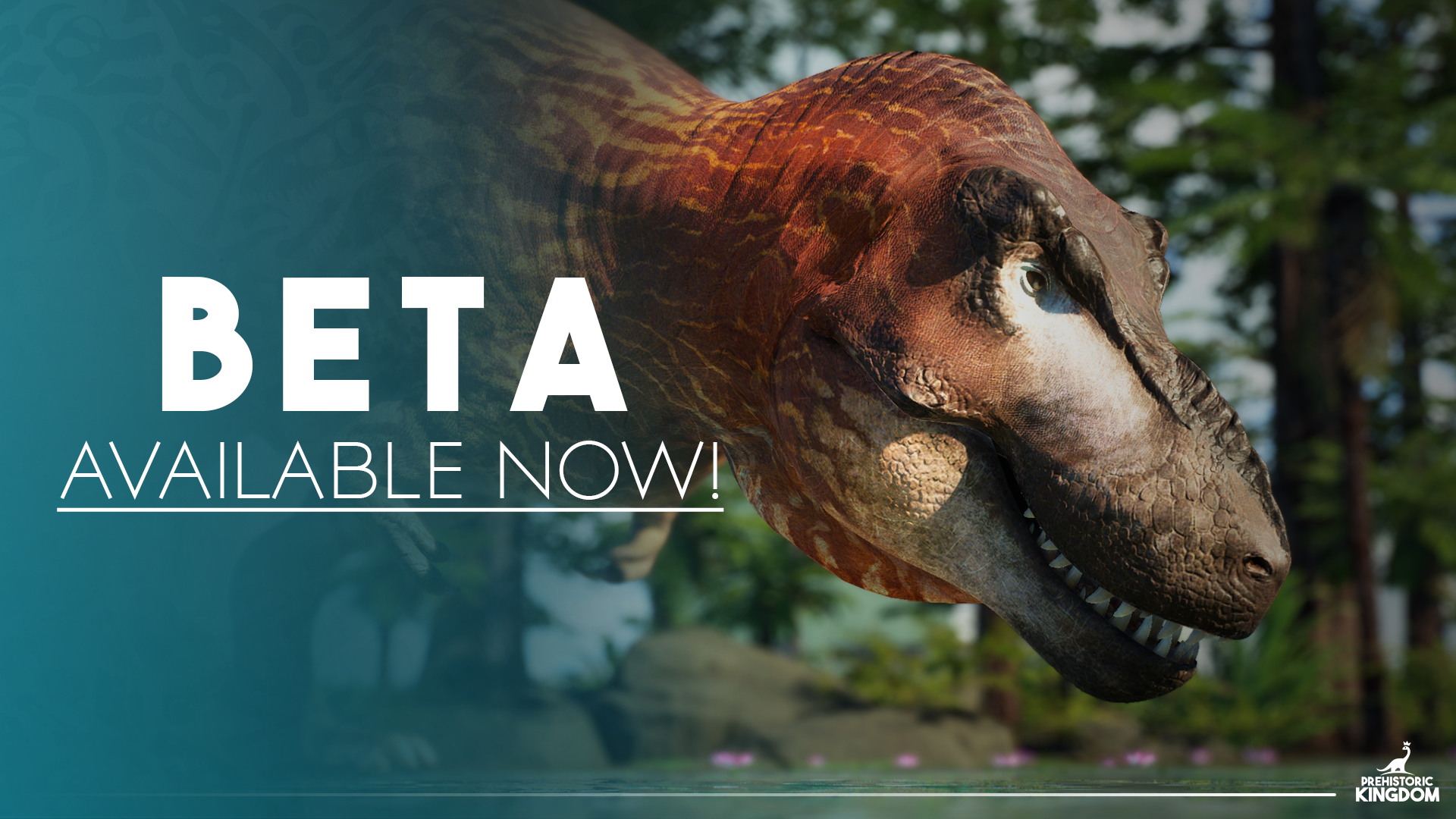